At a dawn ceremony in Auckland on Wednesday 8 February, representatives of the New Zealand Institute of Architects and Ngā Aho, the society of Māori design professionals, signed Te Kawenata o Rata, a covenant that formalises an ongoing relationship of co-operation between the two groups.

The kawenata, which will enable future joint strategies and action plans to be developed between the NZIA and Ngā Aho, was signed by Ngā Aho Chair Desna Whaanga-Schollum and Past Chair Rau Hoskins, NZIA President Christina van Bohemen and Past President Pip Cheshire, and Ngā Aho Kaumatua Haare Williams.

The kawenata (view pdf version) is a values-based agreement, deliberately kept simple, and based around five articles that set out the relationship between the NZIA and Ngā Aho in the spirit of partnership under the mana of the Treaty of Waitangi. The five articles refer to: Respect ­– Whakaritenga; Authority and Responsibility –Rangatiratanga; Knowledge and Tikanga – Mātauranga Whaihanga; Cooperation – Mahi Kotahitanga; and Representation – Kanohi Kitea.

An early draft of the kawenata was presented at a hui at Waipapa Marae in Auckland on 19 February 2016. At the hui, vigorous discussion of the document was undertaken and substantial changes were made to the document.  Subsequently, smaller meetings of a working party including Pip Cheshire and Teena Hale Pennington from the NZIA, and Haare Williams, Rau Hoskins and others from Ngā Aho, honed the kawenata into its present form.

In order to give meaningful effect to the document, the working party that developed the draft of the kawenanta agreed to the ongoing representation of Ngā Aho on the Council of the NZIA.

A Ngā Aho member, Elisapeta Heta, has been co-opted onto the Council for a two-year period.

The signed kawenata will soon travel to each of the NZIA’s eight branches, where it will be recognised and signed by members of both organisations. The local signing offers an opportunity to meet on marae, discuss architecture and the important local issues and priorities. 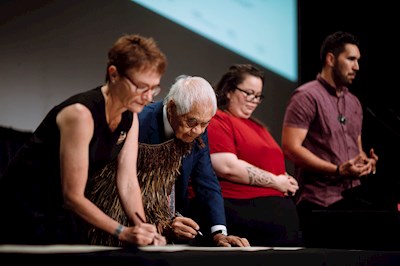 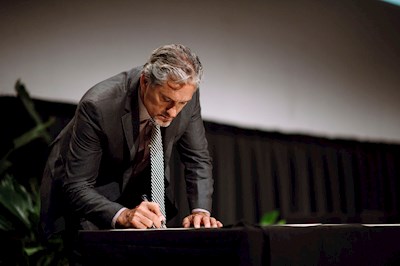 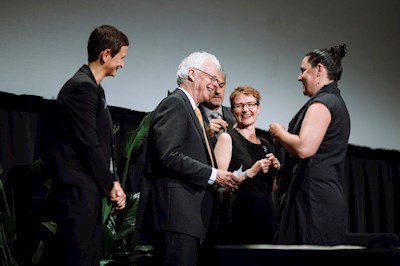