This award pays tribute to the work of an architect of unique talent. John Scott, who died in 1991, left a legacy of buildings which continue to touch the lives and hearts of many with their integrity, finesse and strength.

John Scott has been described as "a genius for seizing upon a human situation, giving it form and making it live sympathetically in three dimensions" (Russell Walden, Voices of Silence, VUP, 1987). Many of his more significant projects were undertaken in Hawkes Bay, where he lived for the bulk of his working life. Scott's deep feeling for the area where he had grown up, and his pride in a diverse Māori, Irish, English and Scottish heritage, shaped his personal architectural style and values. John Scott's domestic commissions in Hawkes Bay, notably the Pattison house (1967) and the Apatu houses represent an innovative reworking of the New Zealand farmhouse tradition — indeed, David Mitchell described the Pattison house as New Zealand’s prototypical "arcadian villa’ (The Elegant Shed, OUP, 1984). Scott wholly rejected colonial pastiche, instead creating comfortable beautifully detailed homes which made a strong response to the landscaped in which they are placed and reflect the architect’s firm allegiance to the humanist tradition.

The Church of Our Lady of Lourdes, built in Havelock North in 1960, demonstrates the unique synthesis of Pākehā and Māori heritage, overlaid with modernism, that guided Scott's architectural vision. In this building we see his instinctive responsiveness to time and place, and his skill in manipulating light and materials to create powerful spaces.

These qualities were brought to bear in John Scott’s best-known commission and one of New Zealand’s most significant examples of religious architecture: Futuna Chapel (1961). This masterful composition of light and space reflects Scott’s respect for the materials and process of building, a process in which he was intimately involved alongside his clients, the Society of Mary.

Much of the building’s strength derives from Scott’s skilful treatment of apparent contradictions. It is at once a place for communal worship and for individual meditation; a public building to serve a congregation and an intimate space for personal prayer. The chapel sits quietly in an unassuming suburban street, but inside it offers what Mitchell calls “an unworldly presence touched with mystery and awe”. It evokes memories of eclectic building traditions - the woolshed, New Zealand’s historic timber churches - yet is utterly idiosyncratic, charged with a unique and even mystical power.

Futuna chapel is perhaps the most potent expression of John Scott’s unique brand of human regionalism. His regard for the principles of modernism was deep, but not doctrinaire, and he fused it with his own personal and cultural heritage and deep feeling for the New Zealand soil.

Tapping into these rich sources, his creativity stimulated by close involvement with his clients and with the building process, John Scott produced a body of work that will continue to influence architecture in New Zealand for generations to come. Both the architect and his architecture embraced the joys and humanity of living, and we regret that John himself is not able to accept this tribute to his work. 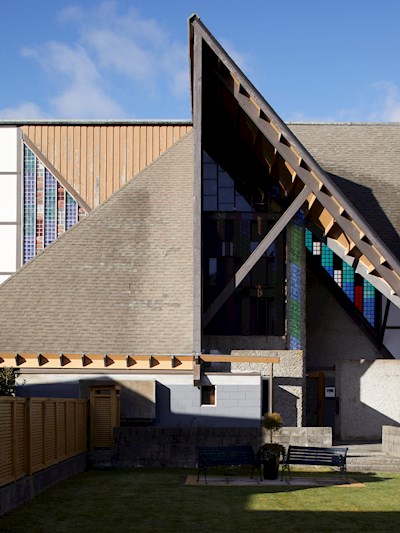 A clip from The Elegant Shed, featuring John Scott