Twenty-five buildings that have changed the face of Wellington city and other regional centres have been recognised in the 2019 Wellington Architecture Awards.

Among the winners are the country’s tallest base-isolated tower, education buildings that mix tradition and culture, small and well-crafted house extensions, and important heritage buildings that have been earthquake-strengthened and restored.

View a gallery of images at the end of this story.

The qualities of each winning project were evaluated in site visits by an awards jury led by Wellington architect Guy Marriage and including architects Judi Keith-Brown and Amelia Minty (Wellington), Anna Marie Chin (Arrowtown), and lay juror Bridget Dorn, who works for a prominent furniture company ECC.

“The award-winning, city-based works have the confidence required of a modern metropolis,” Marriage said.

“They also speak to the particular conditions that shape Wellington’s buildings, and the abilities of our architects to create buildings that bring together innovation, culture and craft.”

Kumutoto Pavilion is a Public Architecture Award-winning waterfront project of much smaller scale. Designed by Isthmus Group, the “folly structure” has a “sense of well-managed mischief and delight, shading a concrete table and creating a much sought-after place for a long lunch”, the jury said.

“Sunhats off to the Hutt Council, who doubled down on falling rolls to create a super-club encompassing bowls, community facilities, and a hard-working RSA, all under a splendid new tensile fabric roof,” the jury said of the Naenae Bowling Club, designed by Tennant Brown Architects.

“Sunhats off to the Hutt Council, who doubled down on falling rolls to create a super-club encompassing bowls, community facilities, and a hard-working RSA, all under a splendid new tensile fabric roof,” the jury said of the Naenae Bowling Club, designed by @tennentbrown, a Public Architecture Award winner.⁣ .⁣ #wellingtonarchawards2019 #wellingtonarchitecture #nzarchitecture #nzia #architecture #newzealandarchitecture photo: @jasonmannphotography

Lower Hutt Events Centre, designed by architecture+, is part of a comprehensive city centre revitalisation that included the restoration of the Town Hall and a replacement for the “much-loved but thoroughly worn out Horticultural Hall”.

“This is a significant new work on a tight budget,” the jury said. “It is exemplary work all round.”

The site of 163 Cuba Street Apartments was once a run-down old drapery building. Reworked by Herriot Melhuish O’Neill Architects, the building “shows the way forward for sensitive urban renewal”, the jury said.

With five awards, Warren and Mahoney Architects had a particularly successful awards night. The practice won a Commercial Architecture Award for Charles Fergusson Tower, “a carefully crafted refurbishment of a modernist classic”, and an Interior Architecture Award for the National Library Auditorium – Taiwhanga Kauhau, undertaken with acoustic consultant ICE Design.

“The upgrade to a long-shelved auditorium project brings the theatre space up to the same high standards as the rest of the National Library,” the awards jury said.

The architect’s interventions, large and small, “have made Toi Art more visible, more viable and more enjoyable”, the jury said.

Warren and Mahoney’s fifth award was for Enduring Architecture – a category that recognises works of architecture at least 25 years old that have continuing relevance. Visiting the Salvation Army Citadel (1990) in Te Aro, the jury found a building that “still sings loud” and is “performing sterling service nearly 30 years after its construction”.

In the Education category, Wellington College’s new Memorial Hall – Alan Gibbs Centre, designed by architecture+, won an award for “showcasing both heritage and functionality and connects old with new”.

A successful fusion of pedagogy and culture saw Te Ara A Tāwhaki, a new building for an Ōtaki wānanga, saw Tennent Brown Architects win an award in the Education category.

“The architects have woven mauri ora into the learning experience through careful placement of major spaces and the bold featuring of the superb quality carvings,” the jury said.

Windy Point House at Eastbourne “sits between a rock and a hard place”, the jury said, “but makes the most of this challenge with exquisitely crafted joinery, cunningly clever planning and stunning views out over the wildest water in Wellington”.

Andrew Sexton Architecture’s Cashmere Oaks House, which was planned around a relaxed courtyard, is “a model of well-executed design in the depths of suburbia”, the jury said.

“Beauty in small things” was an identifiable trend in the Housing–Alterations and Additions category, with modestly sized and carefully assembled projects winning awards.

The alterations designed by Sharon Jansen for an Island Bay house “prove that modest and thoughtful design can create magic in small spaces”, the jury said.

A Lyall Bay House redesigned by Mary Daish Architect has “care and thoughtfulness drawn into every line of every detail – living proof that small can indeed be beautiful.”

a.k.a Architecture’s ability to “generate a sophisticated solution seemingly out of thin air” won it an award for Eglinton House in Mount Victoria, as did Tse:Wallace Architects’“transformative” renovation of an Eastbourne house, and an inner-city warehouse conversion by John Mills Architects.

Three Multi-unit awards were conferred, including one for Salamanca Apartments, which shows Wellington architect Gerald Parsonson’s continued mastery of the type.

“An existing house with good bones has been used as a springboard to reach new heights in bravura design. The detailing is superb, and planning takes the quirky original building and overlays it with a new layer of history and delight,” the jury said.

Te Mara Apartments by Novak+Middleton was praised for setting the scene for the future of Arlington with “quality, solidly constructed city housing that will endure for another century”.

Tennent Brown Architects’ Chapel for Mother Aubert won an award in the Small Project category. The chapel, the jury said, is “quiet, demure and unassuming, yet capable of packing a sizable punch of singular purpose”.

Whistling Sisters, by HDT, which incorporates a charcuterie and fermentation lab as well as two commercial kitchens and a shiny new brewery, also received the sole Hospitality award.

“It is a dramatic transformation of a drab space into one of the funkier new brewery bars in Wellington,” the jury said. 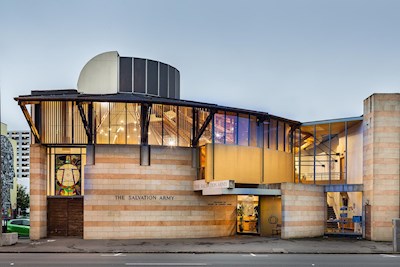 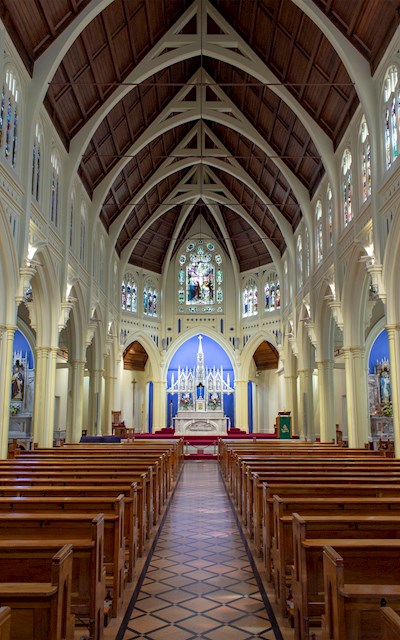 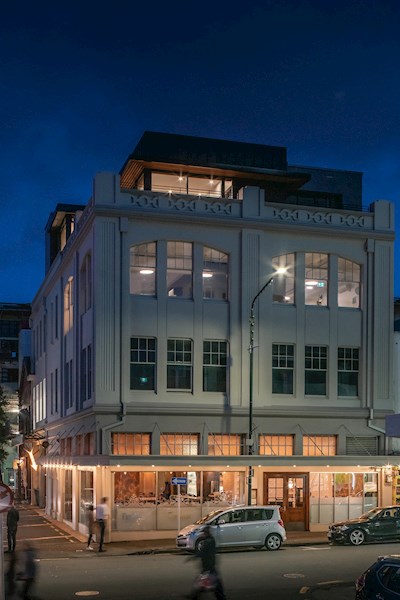 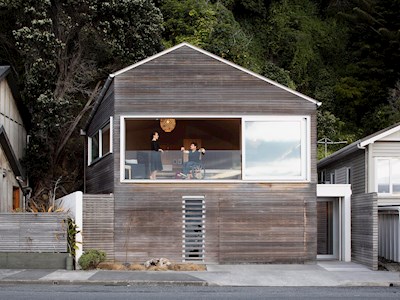 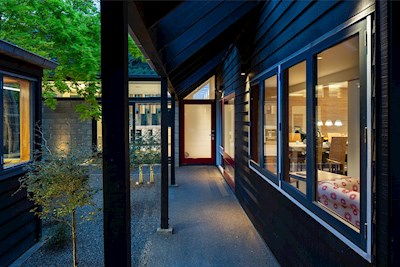 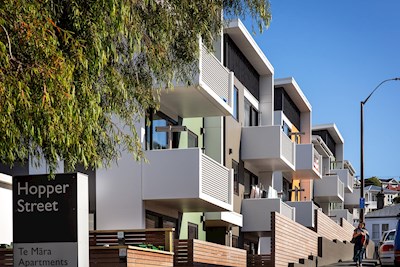 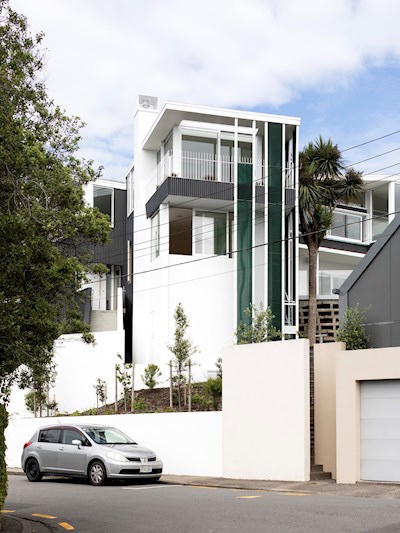 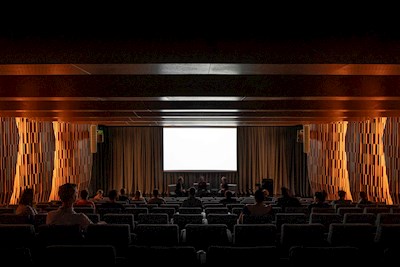 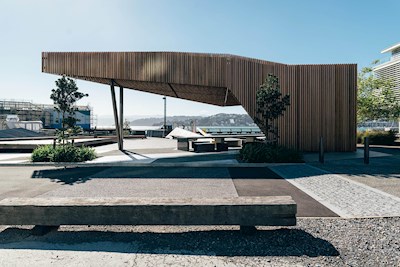 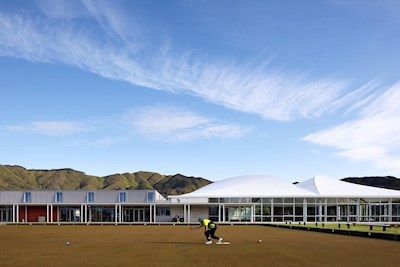 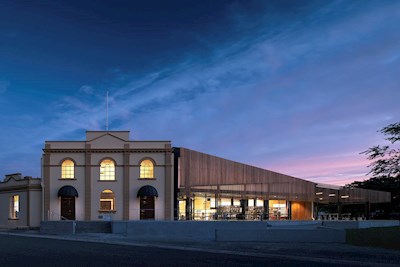